Despite overcast skies and incessant rain, the sun was able to shine for just long enough to allow PACC to romp to a 9-wicket victory over USRC in the opening fixture of the Premier League T20 competition, which was also the very first game of the 2019-20 season.

Wet conditions meant that the match had to be played on the Astroturf surface, and after winning the toss, USRC skipper Imran Arif elected to bat first. USRC were participating in their first ever Premier League, and got off to a rough start – wicketkeeper Umar Mohammad skied PACC skipper Tanwir Afzaal to mid-on 4th ball, and Arif was runout by a direct hit from Nasrullah Rana the ball after.

At 6/2 after the first over, USRC began to rebuild through Skhawat Ali – returning to HK League cricket after a brief hiatus – and Akbar Khan – the Vagabonds CC allrounder donning USRC colors just for this competition. Akbar clouted two big sixes and Skhawat found the fence once, and at the end of the powerplay USRC were going steady at 44/2.

Enter the spinners. Yasim Murtaza got Akbar caught behind first ball after the break on his way to a wicket-maiden, and Ishtiaq Mohammad got Skhawat LBW first ball as well. Two wickets in the space of 7 balls, and USRC were struggling. Sheryar Khan (11 off 19) and Ahsan Abbasi (8 off 17) stuck around for a bit, but Sheryar’s dismissal – holing out to Ishtiaq – sparked the start of the end. 62/5 in 12 overs ended up as 85 a/o in 19, with Anas Khan chipping in with a couple of wickets as well. The three PACC spinners between them ended up with combined figures of 11-2-28-7, and PACC went into the break clear favorites.

Possibly inspired by the success of PACC’s spinners, Imran Arif opted for Ahsan Abbasi’s offbreaks to start off the innings, and was rewarded right away, as Ehsan Nawaz was cleaned up for a first ball duck 4th ball of the innings – PACC 7/1.

The big-hitting veteran put on a six-hitting exhibition, striking six of them on his way to a 24-ball 59. Three of them came in the 2nd over of the innings, bowled by Shehryar Khan, one off the following over bowled by Ahsan Abbasi, and two more off the final over of the powerplay bowled by Kyle Christie, the first of which brought up his fifty in just 23 balls. Tanwir Afzaal kept the momentum up at the other end with 25 off just 13 balls, as 82 of the 86 required came within the powerplay itself. The first ball of the 7th over was dispatched for four by the skipper to complete a comprehensive 9 wicket victory.

With that win, PACC take top place on the points table, with a healthy NRR of 9.696. Next weekend sees KCC play host to USRC while HKCC will take on DLSW. If you missed this match, a full match replay can be found on our YouTube and Facebook pages. Be sure to follow us to catch our live coverage of next weekend’s games!

Man of The Match: Babar Hayat 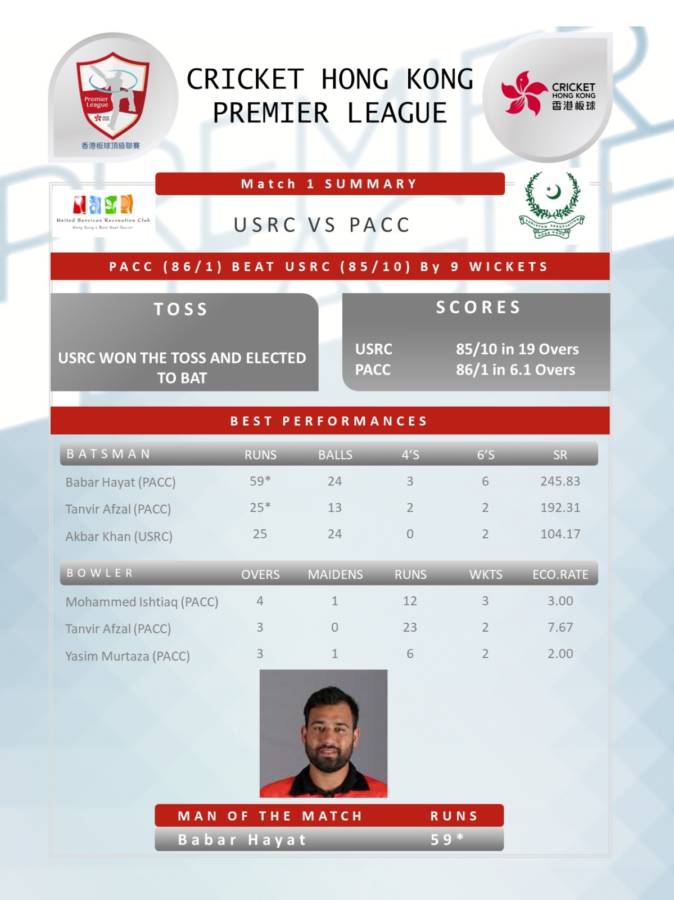