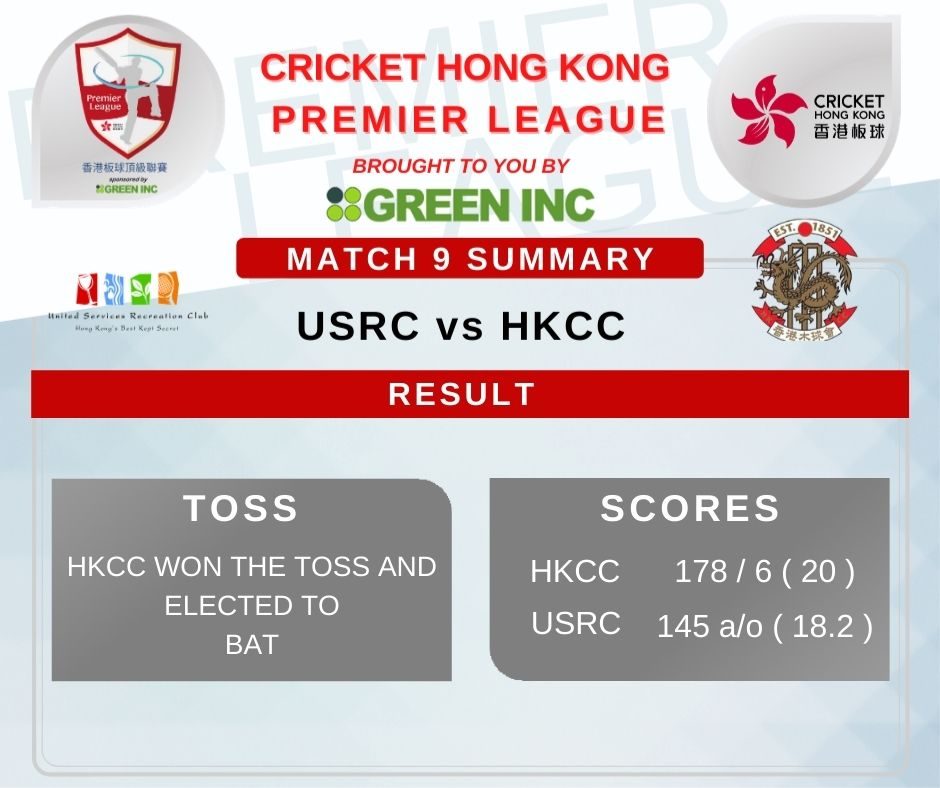 For the 4th game in a row, the HKCC skipper Elliot Scrivener called correctly at the toss and elected to bat first! Nizakat Khan made his return from injury, while young speedster Aayush Shukla was handed a Premier League debut, with allrounders Haroon Arshad and Ryan Buckley rested for this match. For USRC, young batsman Ismail Ahmed Awan made his PL debut, replacing Awais Mohammad Jnr.

Martin Coetzee kicked off the 1st innings in aggressive fashion, hitting Sheryar Khan for 20 runs in the opening over! Shan Raja was economical in his first over, and Ali Mohammad bounced back from getting for a six by Nizakat in the 3rd over to dismiss him LBW 2 balls later! But Coetzee was not to be deterred, hitting Shan Raja for 15 runs in the 4th over, then Ali Mohammad for 17 runs in the first 5 balls of the 5th – bringing up a 21-ball fifty in the process! Kinchit then hit a no-ball for 6, and the free-hit that followed for 4, making it 28 runs from the over! Coetzee then hit two more boundaries off Ehsan Muhammad to end the powerplay – HKCC 87/1, Coetzee on 66 off 29 balls! The big hitting South African was on track for his 2nd 100 of the #PLT20, but fell 21 runs shot of the mark – dismissed by Akbar Khan, who was bowling for the first time in a league game this season! At 107/2 in 9 overs, HKCC would have been eyeing a score in the region of 220+, but Akbar’s spell helped USRC claw their way back into the game. He bowled his 4 overs straight through for only 27 runs and dismissed both Jack Meters and Luke Jones in the 11th over. Raja and Ehsan kept things tight at the other end with their left arm spin, and Ali Mohammad returned to the attack in the 14th over, conceding just 3 and dismissing Ninad Shah! After 15 overs, HKCC were 132/5 – their last 4 wickets falling for just 25 runs in 30 balls. Rory Caines joined Kinchit, and the two southpaws put on 47 runs in the next 25 balls to ensure that HKCC ended on a strong note. Kinchit brought up his 50 off 38 balls in the final over and was dismissed the very next delivery – Ali Mohammad’s 3rd wicket of the match, propelling the USRC speedster to the top of the wicket-taking charts for the tournament! HKCC ended on 178/6, which meant USRC would need to pull off something remarkable to deny them a spot in the final.

Mohammad Umar started brightly for USRC again, with 3 boundaries in the first 2 overs, but was dismissed in the 3rd over by Adil Mehmood. Skhawat Ali hit a six off Scrivener next over, but fell the very next ball, and after 4 overs USRC were 28/2 and already on the backfoot. Mohammad Awais Snr and Akbar Khan kept the run-rate up, hitting Scrivener, Shukla and Luke for boundaries, taking USRC to 64 after 8 overs. But Martin Versfeld’s introduction into the attack triggered another wobble in the USRC batting – ‘Booster’ dismissing Awais to end the 9th over, then Luke striking to remove Akbar Khan just 2 balls later. Ismail Ahmed started aggressively, hitting his 3rd ball for 6, but was run-out just a couple of balls later, and at 79/5 in 11 overs it seemed all but over for USRC. Zakir Hayat, however, was determined to keep on fighting. The 19-year old allrounder smashed 31 off 20 balls, and Imran Arif ticked on to 15 off 18 at the other end. The HKCC bowlers leaked a few extras as well, and with 4 overs to go USRC needed just another 52 to win – difficult, but not impossible. Unfortunately for USRC, that’s when Imran Arif had to leave the field retired hurt, with his lower back acting up and leaving him unable to continue his innings. Adil Mehmood struck that next over to dismiss Zakir for 32, and despite some bit hits from the lower order, USRC fell well short of the target. They were bowled out for 145 in 18.2 overs – Adil finishing with 3/24, and Kinchit taking 2/23. With that, HKCC have booked a spot for themselves in the PLT20 final next Sunday! USRC, on the other hand, are yet to win a Premier League game, but have shown progress with each match, and have had a few good individual performances over the course of the tournament. That first win cannot be too far away!