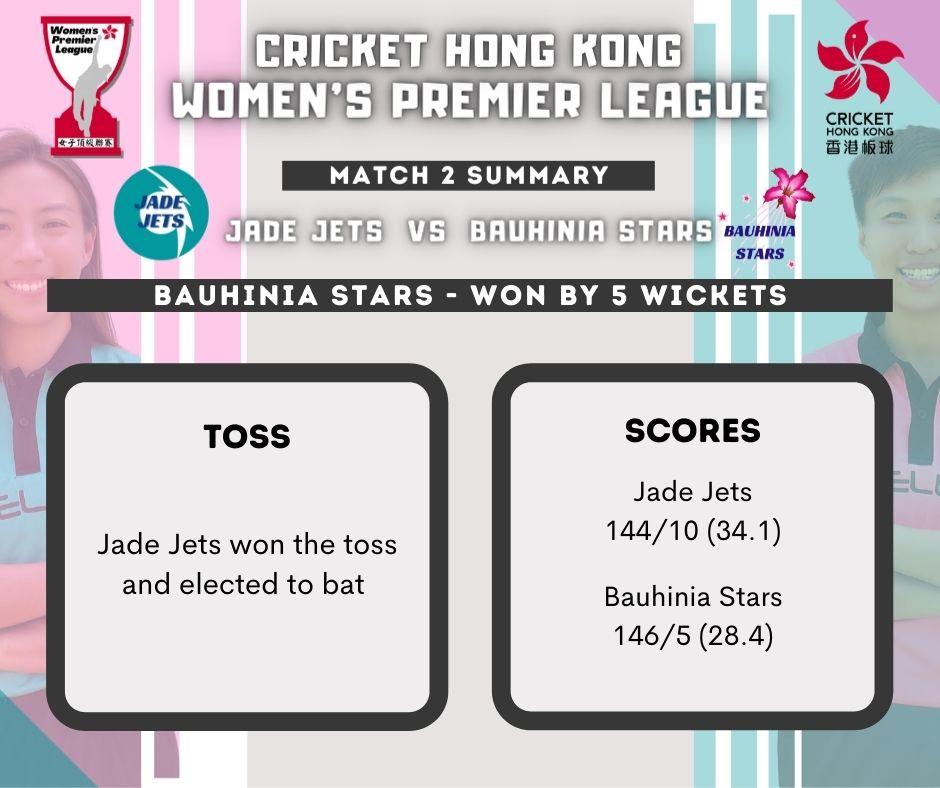 On a breezy morning at TKRRG, the Jade Jets skipper Pull To won the toss and elected to bat first. The Jets made one change to their lineup, with Tammy Chu replacing Sukhjit Gill. The Stars found themselves without the Yousaf sisters for this game but were bolstered by the addition of veteran Connie Wong and the KCC Maiden’s captain Maheen Haider.

Pull To got her side off to a bright start, hitting 3 boundaries in the first few overs and showing the same form that saw her score 50 in the first Women’s PL game. However, this time around she was dismissed for just 18, LBW to Alison Siu on the final ball of the 3rd over! The Jets top order then had a bit of a wobble, with the Stars spinners (Kary and Ruchitha) building pressure and taking key wickets. There was also a sharp piece of fielding by Maryam Bibi to runout Lemon Cheung, and after 11 overs the Jets were 43/4 and struggling! Keenu Gill and Jasmine Titmuss started to rebuild, seeing off the spinners, and putting away the loose balls from the seamers. The experienced duo put on 59 runs in 94 balls to resurrect the innings, and with 102 runs on the board and just under 9 overs to come, it seemed like the Jets would be able to post up a challenging target. However, that’s when Maryam Bibi struck! The 17 year old allrounder was brought back in to the attack. Some sharp work by Jenefer Davies saw Jasmine Titmuss stumped off the last ball of the 26th over for 22. Gill despite three boundaries off Alison's Siu's last over was the next to fall, as three balls from Bibi saw her first get Gill lbw 3 short of her 50, then very next ball trap Iqra Sahar lbw and then with the first ball of her next over Betty Chan departed in the same way to leave the Stars celebrating Bibi's hat-trick, the first of the WPL, which dramatically changed the path of the Jets innings. The Jets innings was wound up as skipper Kary Chan dismissed Katie Gibbons before Bibi completed her 5 wicket haul with a sharp caught and bowled to dismiss Chan Sau Ha off the first ball of the Jets final over leaving the Jets 144 all out.

Shanzeen Shahzad and Emma Lai showed some good intent as they got the Stars off to a bright start before Iqra Sahar had her DLSW team Shahzad caught at Cover Point by Chan Sau Ha. Lai was caught and bowled by Betty Chan in the 9th over as she topped edged one as she looked to go over the top. After successfully hitting Mariko Hill over the Mid On fielder for 4, Jenefer Davies holed out to Sahar trying to repeat the shot off Hill. As the Stars reached the 11th over on 42 for 3, they were at similar position to the Jets in their innings, skipper Chan and vice captain Connie Wong were at the crease and as Gill and Titmuss did in the Jets innings they looked to settle down and re-establish the innings as over the next 7th overs they put on 26 runs but the partnership was broken as Wong was bowled looking to force Gill off the back foot square through the off-side. Ruchitha Venkatesh joined Kary, and the pair tried to consolidate, with just 7 runs in the next 4.4 overs. Ruchitha was bowled by Chan Sau Ha as the Jets mix of pace and spin had left the Stars still needing to get another 71 runs at 5.25 rpo if they were to force victory. Skipper Chan was still there and going reasonably on 17, but needed someone to share the task with her and this brought first innings hero Bibi to the crease and it was soon clear what her intent was as she hit her 6th ball for a six over Mid Wicket and then took consecutive fours off Betty Chan and then a boundary off Hill through backward square, to really change the memento of the innings and to clearly unsettle the Jets. The equation was pulled down to 35 off 57 balls as Bibi's intent seemed to free the pressure on Chan who herself set after the Jets attack with boundaries through the on-side and over Long On, before Bibi brought then Stars home with two boundaries to see the Stars win by 5 wickets in the 29th over, Chan finishing on a run a ball 44 and Women of the Match, Bibi 42 off 26 as the pair put on 72 in 42 balls to secure victory and to set the series up nicely at 1-1 with all to play for in the deciding match of the series on Sunday 13th December again at Tin Kwong Road Recreational Ground.