Kinchit Shah delivered with both bat and ball, while Martin Versfeld took the first five-wicket haul of the competition, as the Hong Kong Cricket Club ended their campaign with a resounding 6 wicket victory over USRC. Electing to field first, the hosts bowled out USRC for just 67 -their lowest score of the competition so far- before chasing it down in under 11 overs, albeit with a bit of a top-order wobble. This takes them to 2 wins out of their 4 games, and a third-place finish in the points table, while USRC end their first ever Premier League competition without a win.

Isaac Poole - returning to the HKCC side as skipper at the expense of Benjamin Zanol - called correctly at the toss, and elected to bowl first. There were several other changes made to the side that played KCC last week. Tom Ingram replaced Adil Mehmood in the pace bowling department, Rory Caines regained the gloves from David Jacquier, Tarleton Hepburn replaced Toby Raper in the batting lineup and Stuart Tohill took the spin-bowling allrounder role from Elliot Scrivener. Hepburn and Tohill were playing their first PLT20 game of the season. As for USRC, their playing XI remain unchanged from the side that lost to DLSW DLIT, but skipper Imran Arif opted to open the batting himself, with veteran Skhawat Ali dropping down to bolster the middle order. On a hot and humid afternoon, Isaac Poole decided to open the bowling with the experienced pair of Tanveer Ahmed and Kinchit Shah, and we were underway.

The first three overs we quiet, yielding just 12 runs, with only a solitary boundary to Arif. Umar Mohammad was stumped in a bid to raise the run rate in the 4th over, and Ahsan Abbasi was caught by Buckley for a first ball duck - Kinchit Taking two wickets in two balls to put HKCC ahead. He struck again in his third over -the final over of the powerplay- getting Imran Arif out bowled, and finished his spell with a wicket-maiden - Skhawat Ali caught behind for just 3. At the end of 8 overs, USRC were struggling at 26/4, Kinchit finishing with the fabulous figures of 4-1-10-4.

Awais Mohammad Snr. picked up two sixes in the 9th over, but was bowled off Martin Versfeld's second legal delivery to be dismissed for 12. This was the start of the second collapse of the innings - Versfeld picking up 4 more wickets help blow away the lower order, as USRC lost their final 6 wickets for just 24 runs. Isaac Poole chipped in with a wicket as well, and despite getting hit for two sixes by Daniyal Butt (21 off 17) bowled his 4 overs for only 17 runs. USRC all out for 67 with 3 overs to spare.

In response, Tarleton Hepburn took Sheryar Khan for a boundary and a six in the third over, but was dismissed a ball later, caught behind. Kinchit Shah looked in good touch, picking up consecutive sixes of Sheryar himself, and was at the non-strikers end when the HKCC batting wobbled. Rory Caines was bowled by Shan Raja in the 6th over, Ninad Shah LBW to Ahsan Abbasi in the 7th and Stuart Tohill out caught Abbasi in the 8th. The score after 8 overs was 43/4. Luke Jones joined Kinchit in the middle, and together they ensured that there would be no more further hiccups - the remaining 24 runs knocked off inside 2.2 overs to complete a comprehensive consolidation win.

Man of The Match: Kinchit Shah 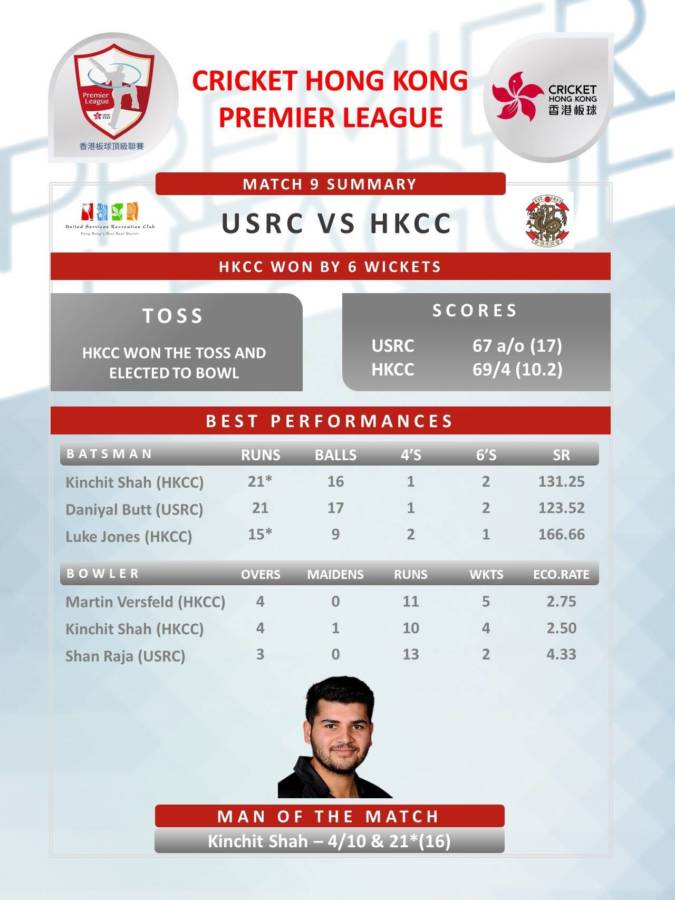